Our members encompass all walks of life and levels of musical achievement. We range in age from high school students to retirees, and our members include public servants, engineers, students, teachers and town planners among others.

We are sponsored by the WA Department of Fire and Emergency Services and represent the department, its staff and volunteers at official and community events.

The band aims to promote music as an enjoyable endeavour for all, giving citizens of Perth an opportunity to take an active part in the local music scene.

The band consists of brass, percussion and woodwind players, rehearses every Tuesday evening, and new members are always welcomed.

This variety and flexibility is one of the band’s major strengths. The band performs in public regularly.  As well as organising several of our own concerts each year, we perform at many Department of Fire and Emergency Services Events which include Firefighter Graduations, Police Graduations, International Firefighters’ Memorial Service, Volunteer Fire and Rescue Service State Championships and The WA Fire and Emergency Services Conference.

We also march in Perth’s annual ANZAC Day parades and Christmas pageants, compete in the WA state band championships, and take on other performance opportunities as they arise. 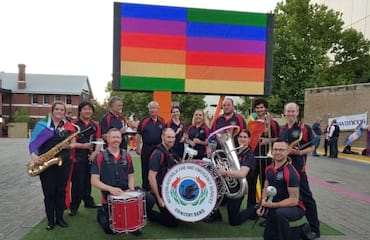 Please note: Public Holidays, School Terms and other disruptions may affect dates listed.
Act Belong Commit promotes activities on behalf of the Western Australian community. We do not host these events ourselves. Please contact the host organisation with enquiries.