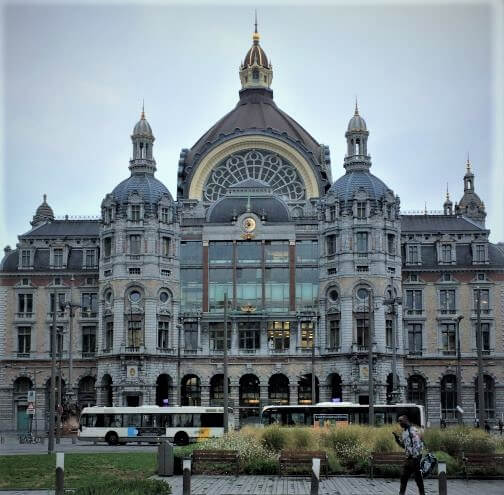 Last month Rob Donovan, our founder, kicked off a six-nation tour to spread the Act-Belong-Commit message around the globe (that’s if we consider Scotland and England as separate nations – which many Scots do).

Rob’s first stop was Belgium where Antwerp hosted the European Social Marketing Association Conference, delivering a diverse audience of around 100 from across Europe, including behaviour change consultants, government departments, academics and researchers. Rob gave a keynote on the origins, evolution and diffusion of the Act-Belong-Commit campaign, followed by a workshop on ’21 reasons for implementing the Act-Belong-Commit campaign’. The talk triggered a number of tweets, and in the words of the conference organisers, “created quite a buzz” amongst attendees.

It was then over to Stirling, Scotland, where Rob met with NHS Scotland. As a result of discussions with our Danish partner, NHS Scotland are planning to include Act-Belong-Commit in their workplace health plans as part of an EU project.

From there, Rob headed to Frome in Somerset, England, to talk to an innovative GP in the NHS Medical Centre about their ‘compassionate Frome’ project – including what the UK calls ‘social prescribing’, which we would emulate by having medical centre staff identify patients in need, go through our ‘Guide to Keeping Mentally Healthy’ with them, seeing where they could Act-Belong-Commit more, and help them connect with groups in the local community.

After a weekend break preparing for the next event, it was onto Oslo for the Nordic Act-Belong-Commit Together for Mental Health Conference, where, to walk the talk, Rob delivered two keynote addresses, two 90 minute workshops (with our Norwegian Ambassador Ruth – no relation – Donovan), and held three meetings: one with our Faroe Islands partners; one with a Norwegian PhD student looking at how to implement the campaign in a municipality; and one with the ‘activist’ group striving to get ABC underway nationwide in Norway.

The conference attracted about 120 people, all enthusiastic about Act-Belong-Commit, with about half the presentations on ABC activities already underway. The mood in this conference was palpable – almost like a meeting of revolutionaries in the Castro/Che Guevara era, and ended with a ten statement ‘Declaration’ to further the cause. We are awaiting the English translate and will then present to health policy makers in Australia to help advocate for Act-Belong-Commit to go nationwide.

After a diversion to the World Anti-Doping Agency in Montreal (Rob chairs the Agency’s Social Science Research Committee), it was down to Elon University in North Carolina, where another enthusiastic group were waiting to talk through their plans and find out more about the campaign. The Elon partners had organised a number of meetings with teaching, research and admin staff, along with a combined meeting that included around 200 students. In Rob’s own words, his visit to Elon went way beyond his expectations.

There was a great feeling of friendship and collegiality on campus, with interactions between staff and students informal and respectful on both sides – and interactions between academic, research and administration staff were friendly, cooperative and collaborative. In short, the ethos at Elon certainly augurs well for Act-Belong-Commit’s implementation on that campus and beyond.

In one of those interesting coincidences that might never have been known had one not been a bit curious, Rob picked up an Elon brochure whilst waiting for one of the many meetings. The brochure listed upcoming speakers at the University and a program of performing arts, music and dance events. On the bottom of the third page was a small but immediately recognisable picture of none other than our first female PM Julia Gillard, with a note that she would be at Elon in April 2019 (no – she will not be singing, dancing or playing a musical instrument – she is on the renowned persons speaker list). Naturally we will get in touch with Julia to brief her on the campaign before she gets there (and to tell her the best hangout places for coffee and local craft beer).