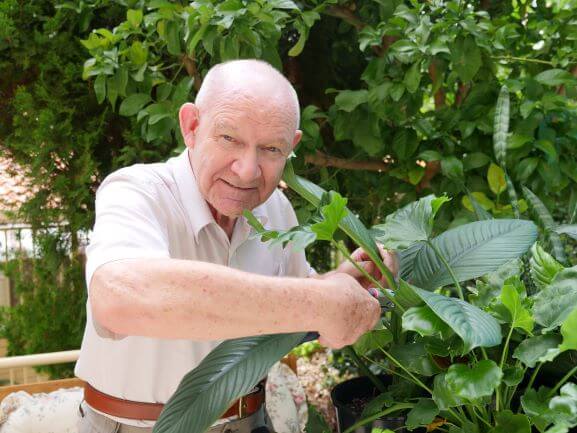 How gardening is bringing meaning and connection to an aged care resident battling depression.

Just over a month ago, Ron Honey, a resident at SwanCare Waminda care facility, was asked if he’d like to take on the responsibility of caring for a new courtyard and garden to be used by residents.

Annemarie Kluvers, Diversional Therapist at Waminda, approached Ron as she knew he had a keen interest in gardening so thought he’d be perfect for the job.

She knew that Ron “isn’t the bingo type” and would be well suited to an activity that kept him busy away from the hustle and bustle of the more boisterous activities on offer for residents, such as concerts or games.

Ron, who has battled mental health issues for many years, was quite reclusive, opting to eat meals in his room and generally stayed away from the various activities on offer around him.

This was Annemarie’s chance to get Ron out and about.

“I popped up to see him one day and asked if the new garden was something he’d like to take on.”

“I was surprised and pleased when he jumped at the chance.”

Growing up in Bindi Bindi (two and a half hours North East of Perth) in the Wheatbelt, Ron has always felt at peace when working the land.

He now wakes at 4am to clean the garden’s footpaths and water plants before settling down for breakfast. After breakfast, it’s onto pruning and looking after the garden’s two resident budgies.

“Before taking on the garden I really felt quite unattached, I just felt I wasn’t being useful,” Ron said. “Now, that I have purpose and I’m busy, I feel a lot happier.”

Not only does Ron enjoy nurturing the garden’s flowers, herbs, vegetables and fruit trees, he gets a kick out of helping others.

“I get a tremendous buzz from seeing other people enjoy the garden too.”

Sometimes Ron and Annemarie take trips together to the local Bunnings store to pick up supplies for the garden, which Ron welcomes with a smile and glint in his eye.

Annemarie says such a simple initiative has resulted in enormously positive changes in Ron’s mental health.

“I’ve seen a huge difference in Ron,” Annemarie said. “Instead of spending his days in his room, he is out talking to people, laughing and smiling. It’s beautiful to see.”

Annemarie says that there are a number of residents at Waminda who thrive on the responsibility of tasks.

“There are residents taking on various tasks such as light administration duties, setting up for events or washing dishes,” said Annemarie.

“Just like anybody else, most people in aged care want to contribute and there are so many ways that they are still indeed useful.

“One of our residents, who is too frail for anything physical, regularly works alongside six other residents to spend time and work with children with disabilities who come to Waminda as part of a local initiative.”

Rob Donovan (PhD Psychology) is Adjunct Professor in the School of Human Sciences at the University of WA, and Founder of Mentally Healthy WA’s Act-Belong-Commit campaign and says that Ron’s story is a great example of the sorts of things that make us mentally healthy, regardless of age, but perhaps more important as we get older.

“Keeping active, having social connections, doing something for the benefit of others, and having a purpose in life are all good for our mental health”, said Prof Donovan. “Ron is also getting an extra boost through his contact with nature, which has direct mood enhancing effects”.

“Many people intuitively know what is good for their mental health, but sometimes they are in a position where they find it difficult to do something or lack the opportunity. Ron is fortunate in that he had someone on hand with a knowledge of his interests and was able to nudge him back into doing something that would not only use his skills but would be something he would enjoy”, Professor Donovan said.

He advises seniors wanting to improve their mental health to think about activities that work for them.

“Look around and see how you can help others, re-connect with old friends, think of a hobby or something you used to enjoy and get back into it if you’re still able to,” Prof Donovan said.

For now, Ron is committed. “If anyone wants to take the job off me now they’ve got a hell of a fight on their hands,” Ron said with a laugh. “I truly love the garden.”

SwanCare has been caring for seniors in Western Australia since the not-for-profit organisation was established in the early 1960’s as Swan Cottage Homes.

Bentley Park is WA’s largest retirement and aged care site, with over 1,000 residents, three (soon to be four!) aged care facilities and the SwanCare At Home service.