For over 10 years, the ground-breaking message of Act-Belong-Commit has been encouraging Western Australians to look after their mental health, and now more people are motivated to help improve it.

Results of a 2017 evaluation of the mental health promotion campaign show that in just a year approximately 200,000 more Western Australians became aware of the Act-Belong-Commit campaign (up from approximately 1.9 million people in 2016). This figure has more than doubled since the campaign began ten years ago. The campaign also made significant inroads in encouraging people to talk about mental health and in reducing stigma. 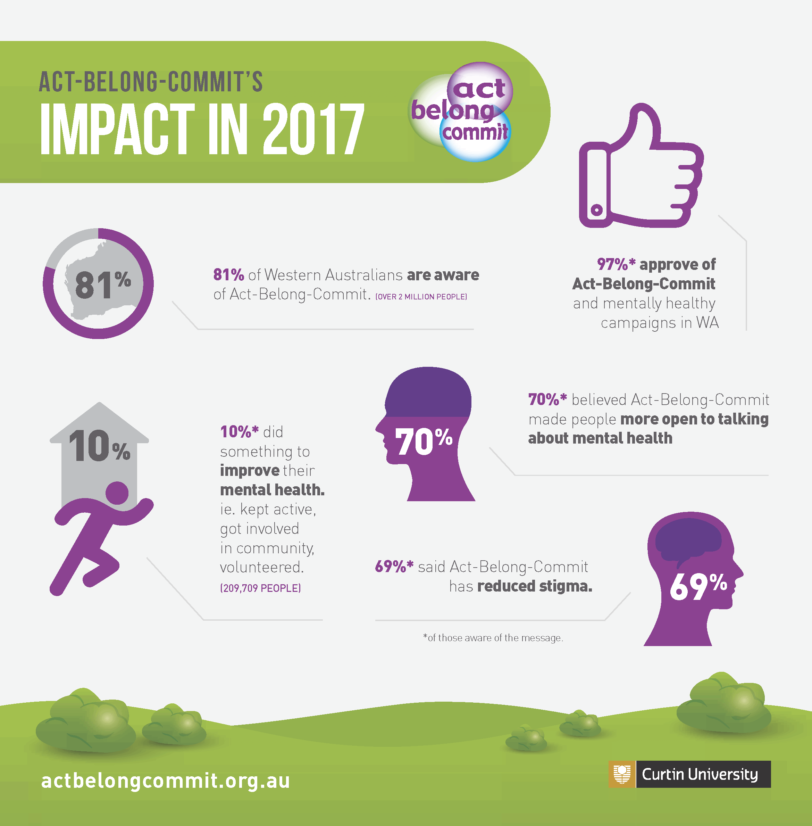 The Act-Belong-Commit campaign continues to grow in reach and impact and is helping to change attitudes and towards mental health, motivating people to take charge and actively do things to improve their mental health.

Celebrating its tenth year since the statewide launch, the Act-Belong-Commit campaign now has over 214 partners across WA, nationally and even internationally, including health services, local governments, schools, workplaces, sport and recreation clubs and volunteering organisations.

The A-B-C guidelines for positive mental health are simple:

Act by taking steps to stay mentally, physically and socially active; Belong by joining a community group or event and being more involved in groups you are already a member of; and Commit by taking up a cause, learning something new or helping a friend.

You can access a full version of the 2017 Evaluation of Act-Belong-Commit here.

To find out more about how you can Act-Belong-Commit visit actbelongcommit.org.au.