The Act-Belong-Commit campaign continues to make an impact, striking a chord with people of all backgrounds and helping to change attitudes towards mental illness, all while motivating individuals and communities to actively do things to improve their mental health.

Results of the 2018 evaluation of the Act-Belong-Commit campaign show that 200,000 more Western Australians were aware of the campaign, an increase from approximately 2 million people in 2017. Awareness and behaviour change amongst those with a diagnosed mental illness or recent mental health problem was even higher.

“The Act-Belong-Commit campaign is helping to reduce stigma associated with mental illness while encouraging people to be more open about mental health issues,” said Ms Amberlee Nicholas, Act-Belong-Commit Campaign Manager. “The campaign is also helping to strengthen the mental health of those already well, stimulating action amongst those beginning to experience feelings of loneliness or depression, and aiding those in recovery.”

Of those surveyed, 65% stated the campaign had made them more open to talking about mental health, and 63% stating it had reduced stigma associated with mental illness.

Data from various sources shows that Act-Belong-Commit is also contributing to social cohesion, resilience, quality of life, and the capacity of individuals and communities to cope with the stresses and strains of everyday life.

“It does this by prompting people to be more physically active, to join clubs, to volunteer and to take on challenges – all behaviours that protect and promote mental health,” said Ms Amberlee Nicholas.

The A-B-C guidelines for positive mental health provide a simple approach everyone can adopt to become more mentally healthy:

Act: Keep active in as many ways as you can – physically, mentally, socially and spiritually.

Belong: Keep connected to friends and family; get involved in groups, and participate in community events.

Commit: Take on challenges or causes that provide meaning and purpose in life.

You can access the full version of the 2018 Evaluation of Act-Belong-Commit here. 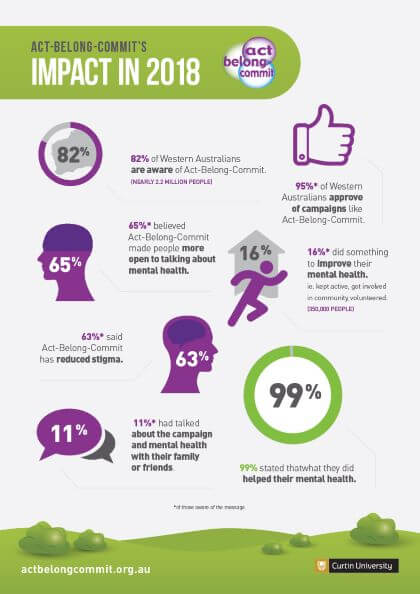