The Act-Belong-Commit Awards recognise and showcase WA people and organisations that epitomise the ‘Act-Belong-Commit’ way of life, and celebrates their mentally healthy achievements. Read about the 2017 winners.

Eight year-old Kohbi Barrow from the Pilbara is a young community champion who whole-heartedly embodies the Act-Belong-Commit message. From volunteering and fundraising, to sports and arts; there isn’t an area that Kohbi hasn’t participated in to some degree. Since moving to the Pilbara in February this year Kohbi has been involved in soccer and athletics at his local school, has donated toys, books and food to children less fortunate, and has submitted entries to the Point Samson Art Award & Exhibition.

Kohbi’s compassionate nature is reflected in the long list of random acts of kindness that he performs on a regular basis. From something as little as high-fiving the Roebourne police when he sees them in the streets, to learning the names of the staff at the local grocery store and donating food, toys and books to those in need. 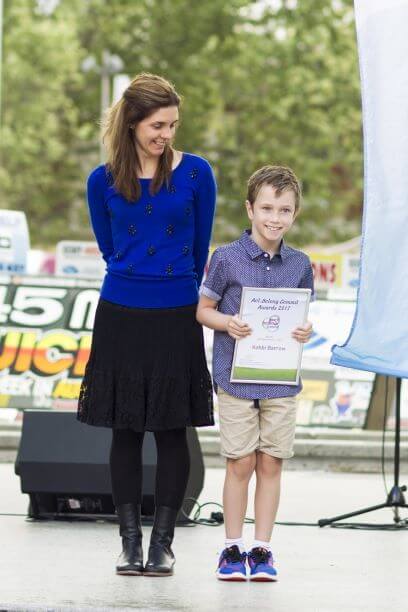 Jordina is a 23 year-old Curtin University health promotion student who exemplifies the Act-Belong-Commit way of life.

She manages to balance her studies and numerous volunteering commitments with keeping physically and socially active.
Earlier this year she was involved in the John Curtin Leadership Academy, which engages students to undertake leadership training to develop their skills and abilities by working on real community projects. She collaborated with a group of fellow students who assisted Perth charitable organisation Manna Inc to raise $180K which equates to 36,000 meals for homeless people in Perth.

In addition, through her role as a board member of Borderless Friendship WA, Jordina has self-funded travel to Thailand three times in the past two of years to volunteer as a sexuality relationships educator within the hill-tribes of northern Thailand. 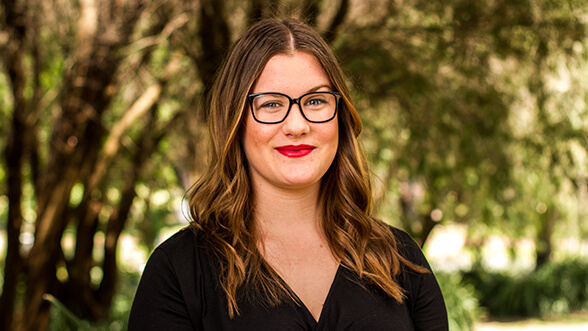 Mount Lawley Senior High School student Oscar is always willing to give things a try, he keeps physically and mentally active and is involved with many groups outside of the school setting including the Youth Advisory Council to State Government and he is a YMCA WA spokesperson on youth issues.

As head girl at Mount Lawley Senior High School, Olivia is an inspirational leader to her peers. She’s also a member of her school’s Mock Trials team, the Student Wellbeing Committee, regularly plays netball and soccer and is always keen to be involved in sports carnivals. 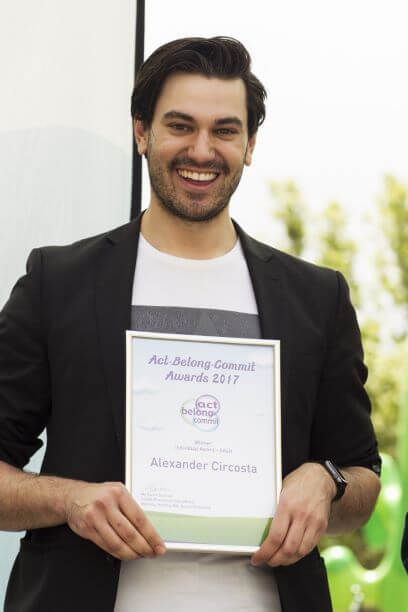 Floreat man, Alexander Circosta, is the Western Australian Act-Belong-Commit Award winner in the adult category for 2017.

Alexander enthusiastically represents the Act Belong Commit values and actively promotes them within all aspects of his life. Alexander founded the teaching program ‘Only the Human’ as a means to offer opportunities for people to have a go at improvised comedy for personal and professional satisfaction, without the unwanted pressure of performing within a Comedy venue.

Alexander sees improvised comedy as much more than performance art, but also as a means for community engagement and social change to improve mental wellbeing. In addition to his contributions through Only the Human, Alexander volunteers his time at his local Vinnies retail outlet, and also coordinates the choir at his local church.

Described as a great believer in true community spirit, Tracey is being recognised for role in the recent re-establishment of her suburb Beeliar’s resident group, Beeliar Community Voice. The association is run by a group of volunteers whose main focus is making Beeliar an attractive, safe and community-focused suburb.

Suzie volunteers at a soup kitchen through ‘Homelessness We Care’ one evening a week and organises daily living donations for them as well. She is also involved with the Morley Eagles Baseball Club, is a board member for Rainbow Rights WA and volunteers with the WA Marathon club.

Maureen is described as an inspiration to those around her as a modest, humble and hardworking lady.

She lives and breathes the Act-Belong-Commit way of life. Every day she is mentally , physically and socially active, not only benefitting her mental health, but contributing greatly to the health of those around her, notably through her contributions to the local Denmark Dragon Boat Club.

Not only is she committed as the club’s secretary, but Maureen regularly takes part in training and travel with the club, having represented WA three times in Australian national championships.

Maureen has nurtured all members through her quiet, modest contributions. Maureen is up to her knees in the cold Denmark River, up to her elbows washing dishes, serving up sausages at the fundraising sizzle or bringing yummy catering in an effort to support the club. 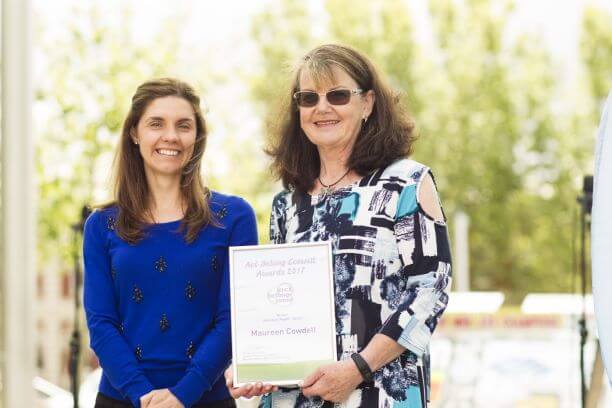 As the President of Soroptimist International of Karratha & Districts Glen has been instrumental in the development of many initiatives including a community garden, a writers group, a camera club, the Pilbara Girl program for young Aboriginal girls and various other events ensuring people of all ages and all walks of life socialise, remain active, and help others.

The Spirit of the Streets choir is a not-for-profit community organisation aimed at providing an environment where people from all walks of life and social backgrounds can come together in song and friendship.

In its ten year journey, the choir has created a singing community which is supportive and non-judgemental. The Choir’s mission is to provide an opportunity for people who experience social exclusion or disadvantage to participate with the general community and develop as an active member of a performing choir in a safe and welcoming environment.

They actively promote the mental health benefits of being involved in the choir, promote the Act-Belong-Commit message at public events throughout the year, and are always encouraging others to join in. 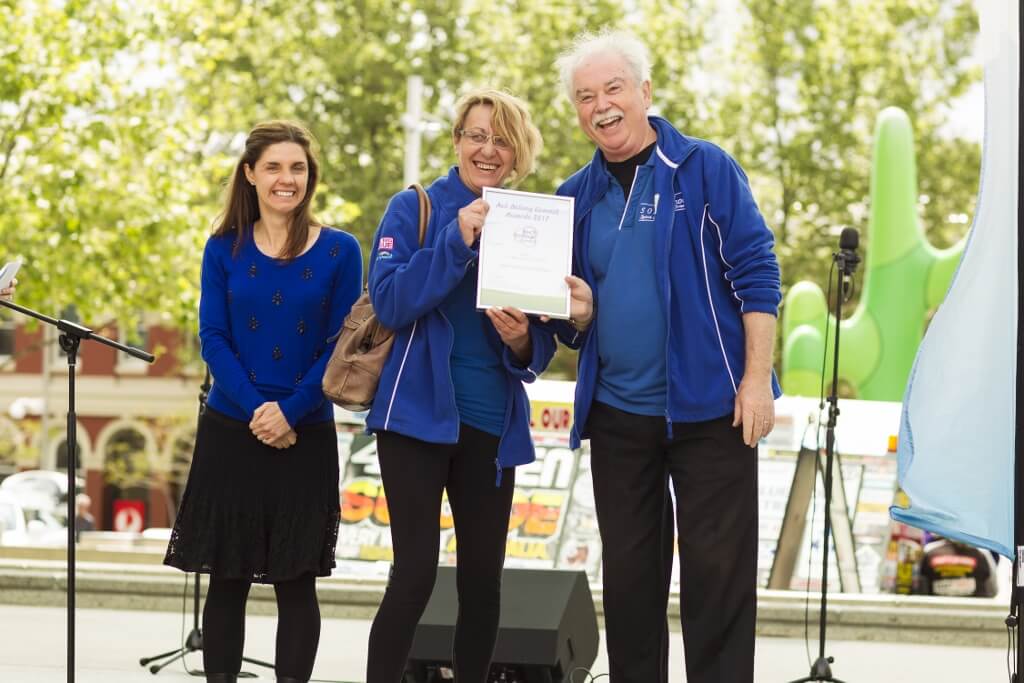 The Perth Active Depression Support Group embodies the Act-Belong-Commit message in every activity that the group undertakes as part of its daily operations. The group encourages people to act to improve their mental health through a provision of a diverse range of recreational activities, run by highly skilled and dedicated individuals on a predominantly volunteer basis.

As a mental health service, Ruah Community Services has a strong focus on encouraging individuals to take action to protect and promote their own mental wellbeing.  The Act-Belong-Commit message is at the forefront of the organisation, with the message being promoted extensively to clients, staff and the wider community.

The Great Southern Population Health team has enthusiastically embraced the Act-Belong-Commit campaign across the region since 2005.The health promotion team has two officers that work extensively in the region to support and develop a partnership approach to build good community mental health in the Great Southern.

From local governments, to community centres, a roller derby, a depression support group and even a small community pharmacy, they (the health promotion team) have identified organisations that have strong connections across the area and worked in partnership with them to promote good mental health.

In addition Act-Belong-Commit is promoted across a variety of settings by Health Promotion staff. Project Officers attend Health Service Open Days, Healthway-sponsorships, and other events to promote the messages through information stalls and merchandise.

Since adopting the Act-Belong-Commit Mentally Healthy Schools Framework in 2014, the school has established a Wellbeing Action Team and Mental Health Map to help foster a culture of positive mental health within the school community.

Some of the initiatives include: professional learning sessions on social and emotional wellbeing for staff, peer meditators between younger and older students to improve socialisation, regular parent and community workshops,

and other annual events such as ‘ RU OK ?’ and International Family Day that promotes open discussion around mental health and brings the whole school community together.

Good mental health is a priority at Cooinda Primary School which is evident through their many strategies and internal policies that have been put in place since 2007.

For students, the school utilises the ‘You Can Do It’ positive mental health program in conjunction with the Act-Belong-Commit lesson plans. The school also hosts regular networking morning teas for staff which includes information from various health agencies.

Wyalkatchem District High School has used the Act-Belong-Commit Mentally Healthy Schools Framework to promote positive mental health and well-being in the school and wider community by initiating a number of activities both within the school and engaging with community groups and the town.

The school offers a plethora of activities under the Act-Belong-Commit banner including a tree planting scheme, a peer mentoring program between students, a buddy ready program, young writers group and the Friday Club, which gives students the opportunity to learn a new skill such as French, Art, Cooking and mix with other age groups and members of the community.

Impressively, Wyalkatchem District High School is actively engaging and supporting their local community through a reading program at the local elderly care residential facility. Students attend the lodge and read to the residents, after the reading session students stay at the Lodge for morning tea and take part in a craft activity with the residents who show them how to knit and crochet. 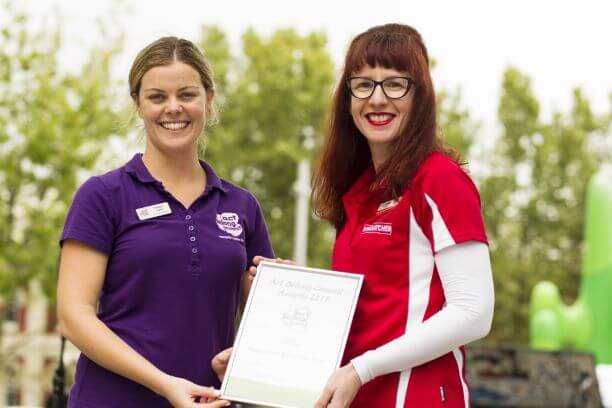 Mount Lawley Senior High School has embraced the Act Belong Commit message across the whole school.  Activities include a coffee club for parents to network and share advice, whole-school teams for fun runs, a school breakfast program, volunteering opportunities for staff, and lunchtime stalls for students that cover a wide variety of areas from bullying, positive body image and gender equality.

Mental health and wellbeing is a priority at Willetton Senior High School.  The School has a wide variety of activities on offer to students, staff and the wider community that fosters a culture of good mental health. The school has a focus on partnerships within the community and keeps a close affiliation with local youth groups, the shopping centre, dance schools, the local basketball stadium and also rotary.